A KiDSMARATHON story in Cheshire

When the final mile started I immediately went to the back of the runners to “run/walk” with the more challenged kids, I recognized that these runners, almost all of whom had done the 6-8 weeks of training, were just going to need a little more encouragement to finish their mile. What was incredible, most of them liked the idea of the run/walk as this suddenly presented something that they could do! Lap after lap we circled and although they were challenged to keep going, the other kids who had now finished came over to encourage and cheer our few runners onto the last lap. Into the final 50 yards the cheering was so strong and everyone at the stadium knew our runners were going to Finish, and the runners knew too, and they raised their hands in Victory as they too had Finished and were Winners!!

“Finishing is Winning and Winning is Finishing”.

This was at Cheshire final mile.

The Big story behind Finishing is Winning and Winning is Finishing.

“New York City Marathon 1983, I had just won the Greatest run of my life, I was the very first person from the start line at the Verrazano Bridge on Staten Island to arrive at the Finish line in Central Park New York City. I had run the race of my life through the five boroughs of New York chasing the lead runners and finally catching the leader Geoff Smith from England with just 385 yards to the Finish line. 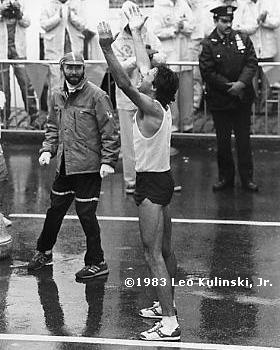 I had Finished First, Winning the greatest Race on earth, I thrust my arms up in Victory, dropped to my knees and kissed the ground and looked to the sky to give thanks for Winning this great Race, The New York City Marathon. I was overwhelmed with emotion, and by the excitement of the thousands and thousands of people watching. I waved to everyone, I was interviewed by ABC Television who would broadcast the race around the World, and especially to my home country New Zealand, where all my family were watching. After a few hours of all the congratulations and celebration I went back to the Finish line on my own to savoir my Winning of the Marathon. I watched as thousands of Runners were still Finishing their Marathon, I stood about 100 yards before the Finish line for over an hour, cheering on these people, watching them Finish their Race many hours after I had Finished. All these runners finishing would be so happy, most would raise their hands in Victory, some would jump up and down with happiness, some even danced! I even saw people crying with excitement that they have Finished. I realized that Every Runner who Finished that day, was a Winner, that Finishing is Winning and Winning is Finishing! All of the 20,000 runners who Finished that day were winners just like me.”

And so it is, if you focus all your energies to be the best that you can be, prepare and train to run the run of your “life” to complete what you started and Finish, you are a winner!

“Finishing is Winning and Winning is Finishing”.